After being severely warned against going here by a French tourist in KL, who told us it was very dangerous and many kidnappings have taken place, we arrived in Sandakan. I must admit it was a scary flight, when we were at the boarding gate in KL, a weird looking man started talking to us. Now I know this isn’t that weird, but he sat next to us and was asking us a lot of questions such as where we were staying when we arrived in Sandakan. I didn’t want to give him any information, he wasn’t a backpacker or a local, he was from India and told us he worked in the plantations. The fact is, he could of been anyone and judging by the UK goverment declaring “DO NOT TRAVEL THERE UNLESS AN EMERGENCY” I was being as cauticious as possible. Tom on the other hand was happily chatting to him and even blurted out the name of our hostel we had booked! I couldn’t believe he said it, I kicked him in the shin for it, whilst the weird man stopped talking after that and made 6 different phone calls in another language straight after each other. He then got up and left swiftly…Very strange.

Tom was shocked at himself too for telling him and became a bit frantic when it was time to board the flight, he even said to me “We don’t have to get on, we could get our bags off now”. It was too late though and we did really want to go to Borneo despite being offput. The whole flight I could tell Tom was nervous, we had it in our heads that this guy had found out where we were staying, called someone to pretend to be our taxi driver and then take us in the jungle and kidnap us. A bit farfetched I know, but this was Borneo. When we landed we saw 2 French guys who got off our flight, seeing as the weird man was just staring at us from the other side of the conveyor belt, I decided to go and make friends. The airport was small and basic, we were the only 4 Westeners there. We had infact got a transfer taxi booked with our hostel so there should be someone waiting for us at the other end. We were scared though and decided we would ring the hostel once we met the driver to confirm his name etc. Well… When we got through to arrivals there was so many malaysian men standing with signs it was hard to read all the signs but in the corner of my eye I saw a white bald man sitting on the bench holding a sign with Tom’s name on it. We walked over and I said “hello”, the man started talking and was English, which was a shock anyway. But when we asked where abouts in England he was from, he was from the exact same village as Tom! So bizzare. It almost felt like a god send, we didn’t have to worry anymore about being kidnapped, we were with someone from HOME! Moments like that really do show what a small world it is. The fact that we were nervous about going there anyway and then that scare with the weird man, it was such a relieve. Not to mention the other fact that the village in which Tom is from is tiny and we’d never met anyone on our travels from there, let alone in Sandakan airport!

When we arrived at Seaview Sandakan backpackers it was quite late, we were welcomed by the sweetest lady called Nabistul who before we did anything, made sure we sat down and had some tea and home made banana fritters, which were lovely! She was an older Malaysian lady, the whole place had a nice homely vibe about it and she reminded me of a doting grandma. After a good night sleep, the next morning she talked us through trips and tours we could do in that area. We were only here 2 nights as we were heading to one of the islands for diving. However, we did have booked the orangutan rehabiitation centre. I’m gutted we didn’t stay longer as some of the trips did sound amazing like the river cruise. Nabistul loved talking about the incredible animals that her country had to offer and she just sat and listened for hours to other backpackers telling her stories about their adventures and why they were here. Her homemade roti canais for breakfast were also delicious!

Our day at Sepilok Oranguatan rehabilation park was so good. There were two feeding times during the day where fruit is put out on a stand for the orangtuans. This part felt a bit like a zoo, we were all there patiently waiting to see one. Although none of it was enclosed it was all in the open jungle, and the only thing separating us was a bamboo rail. We waited for a while and then we heard rustling in the trees, there were ropes from every direction joining upto this food platform and one by one the baby orangutans started to swing across to it. It was amazing to see them climb over our heads, some even peeing over our heads which was gross but funny as it wasn’t on my head! Feeding time soon came to an end and there was an option to do a nature walk around the jungle. Not many people did this but we decided to as there were hundreds of orangutans living in this area of jungle… Somewhere. The first half of the walk was disapointing, no real sightings. However, as we were walking back, in the distance I could just see this small ginger fur walking on the footpath. I thought to myself “No…it can’t be!” But as we got closer it was, a small orangutan just casually walking past us. Unforunately more people came over to take photos and he must have got scared as climbed up a tree, we were so lucky to get that opportunity though and I even managed to get a quick selfie!

Opposite the Orangutan centre was a rehabilitation centre for sun bears. We spent a couple of hours in there watching them and talking with the guide who told us about each one and what situatuions they lived in before they were rescued. Some were really upsetting, one in particular who paced a really small distance every day all day. The guide told us that even though he was now in this big open area, the distance he paced was the same size as his old cage he was kept in. They had a lot of psychological issues but this was the best place for them now.

The next day we had to say goodbye to sweet Nabistul and decided to head to Mabul island. Again, before this decision we were talking with other backpackers the night before. Some had said not to go to the islands as this is where the most recent kidnapping had happened only 2 weeks ago. But others said it was fine and we should definietly go. We decided to take the risk and a lovely English backpacker called Sarah came along with us. We were dropped off in the town centre to buy our boat tickets, we made it just in time. There’s only one speed boat that goes once a day, there was only us 3 and a local family of 5 on our way to Mabul island… 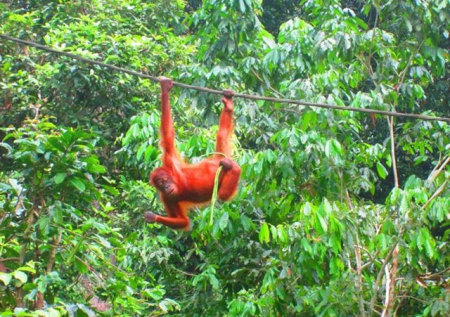 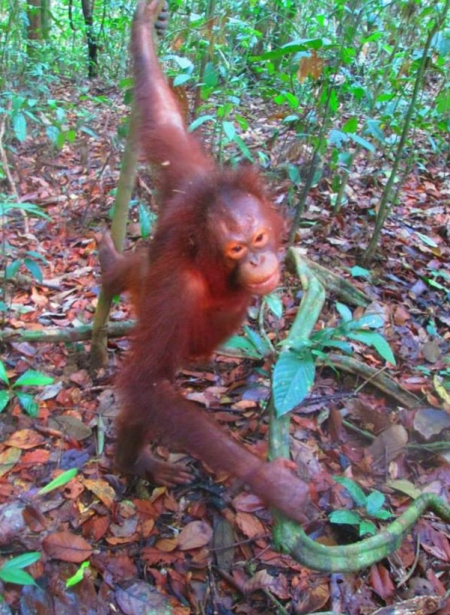